Sontarans are not my favourite Who villains by any stretch but considering they were the third baddy the fourth Doctor faced combined with how amendable they are to the Mego style, Styre was a natural fit. He's also a joy as I'll point out after the jump..
Read more »
Posted by Plaidstallions at 8:20 AM No comments: Read more »
Posted by Plaidstallions at 1:43 PM No comments: Perhaps the figure I most looked forward to is the Cyber Leader from "Revenge of the Cyberman". You can keep your JNT era look, this has always been the ultimate design for me.

It is a look that has also been somewhat under served in terms of merchandise. Product Enterprises never got their 1/6th scale version to market, so I was overjoyed to see this guy in the second wave of BifBangPow Doctor Who. More photos after the jump:

Read more »
Posted by Plaidstallions at 6:41 AM No comments: Less than a week after New York Comic Con my parcel from Entertainment Earth has arrived containing the four figures I most looked forward to in 2011. There will be more photos to follow today but I wanted to dedicate this post to the most important figure, the mego era Doctor himself. The figure itself is joyous and BBP smartly avoided a grinning Doctor (although I guess that leaves room for a future variant) and instead used the grim visage seen in the show's opening credits. His hair gives the appearance of a large head but it's really show accurate. The figure comes with a hat but I'm sad to report it just doesn't work. Mego fans will likely be able to create a work around or use the hat for Indiana Jones customs. The figure comes with a beautiful rendition of the Sonic screwdriver, harkening back to the Denys Fisher line. One thing I noticed from the back of the card is that these puppies are limited to 3,000 each, so if you're sitting on the fence about these this might be a motivator.
Look for more photos of waves 1 and 2 today...

Posted by Plaidstallions at 8:22 AM No comments: 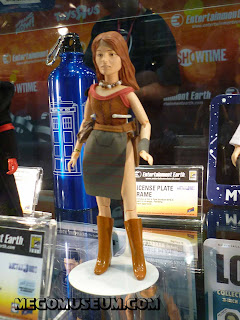 Wave 2 will give us Megoheads and Doctor Who Collectors in general something they are generally lacking, figures of the companions starting with Leela.

This is a great throwback to Mego history seeing as Leela was the first Who companion to get an action figure way back in 1977. Could Sarah Jane be far behind? How about a Romana two pack? We live in exciting times Mego-Who-Heads!

Pick up Leela and Sutekh at Entertainment Earth!
Posted by Plaidstallions at 7:01 AM 6 comments:

Skaroth and Sutekh for Wave Two 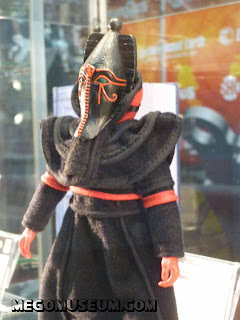 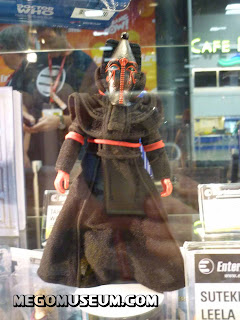 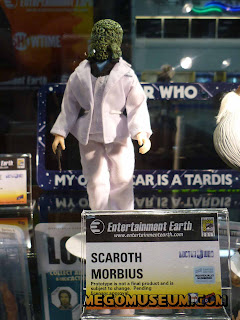 Just some shots via Megomuseum from the floor of SDCC as we can see two of the more memorable foes from "Pyramids of Mars" and "City of Death" look phenomenal in Mego format.

Pick up Leela and Sutekh at Entertainment Earth!

Posted by Plaidstallions at 6:48 AM No comments: 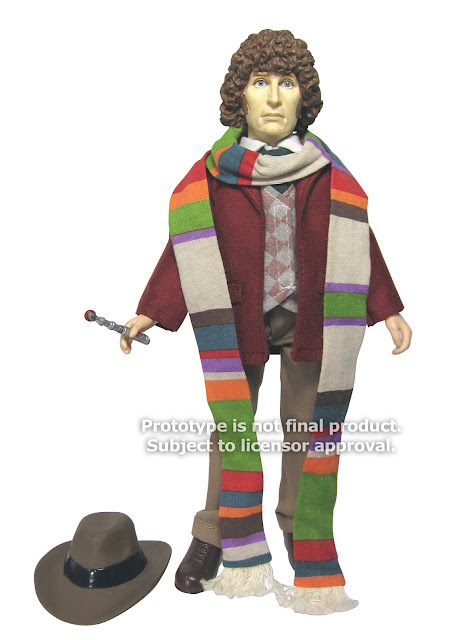 The first Doctor in the Bif Bang Pow series of Doctor Who figures (and hopefully not the last) is fan favourite fourth Doctor, Tom Baker. He comes adorned in his early garb, complete with trademark scarf, sonic screwdriver and fedora.
Posted by MegoScott at 12:22 PM 1 comment: 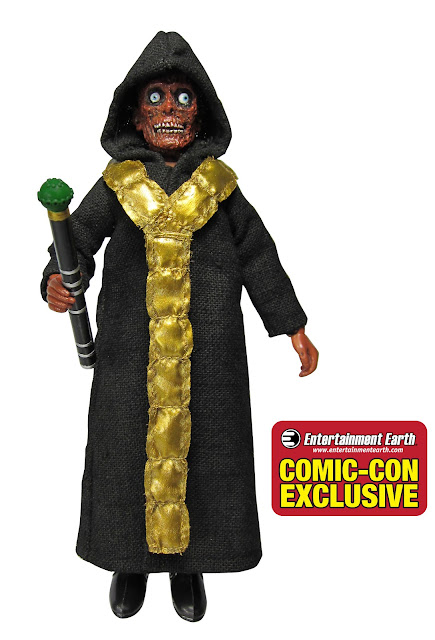 The Peter Pratt version of the Master from the "Deadly Asassin" is in the first wave of Bif Bang Pow Doctor Who figures and rightfully so, this version of the Master tangled with the fourth Doctor on two different occasions. Could a Roger Delgado Master be in the works? One can only hope!
Like all of these figures, the final release is subject to change based on licensor approval.
You can pre order the Master at Entertainment Earth right now
Posted by MegoScott at 11:39 AM 2 comments: 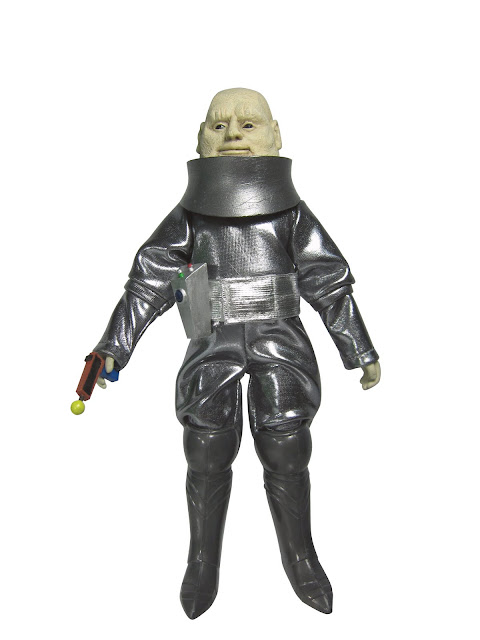 BifBangPow! has revealed shots of their second figure in the new Doctor Who Series, this being Field Major Styre from the episode "The Sontaran Experiment". The five fingered Styre comes with his blaster and the patented Sontaran Helmet which is of course, removable.
Like all these shots, these figures are subject to change depending on licensor approval.
Styre is available for Pre Order from Entertainment Earth 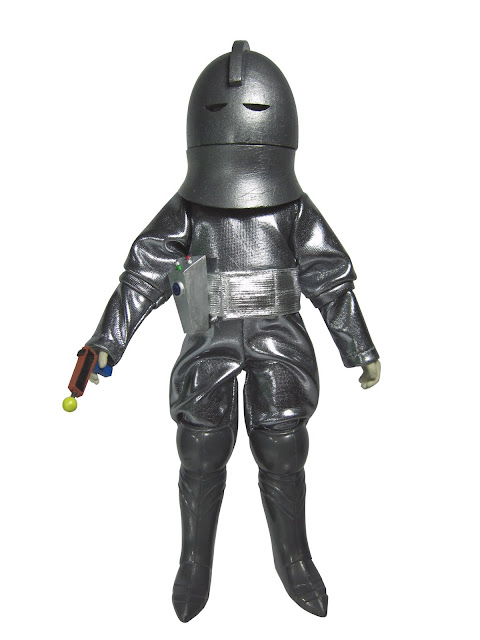 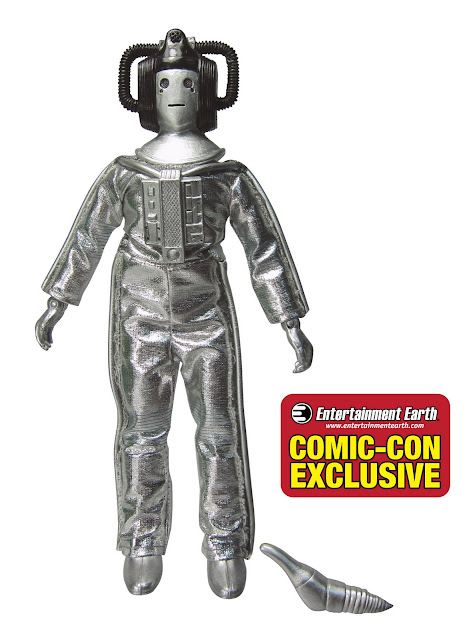 Straight out of the fourth Doctor Adventure "Revenge of the Cybermen" comes the Cyber Leader along with the Cyber Mat used to spread the virus at Nerva Beacon. He is now available for pre order at Entertainment Earth
It's a pretty easy guess that we'll be getting a regular Cyberman down the line from BifBangPow, oh the army I'm going to build....
Posted by MegoScott at 11:16 AM No comments:

The Doctor and Field Major Styre 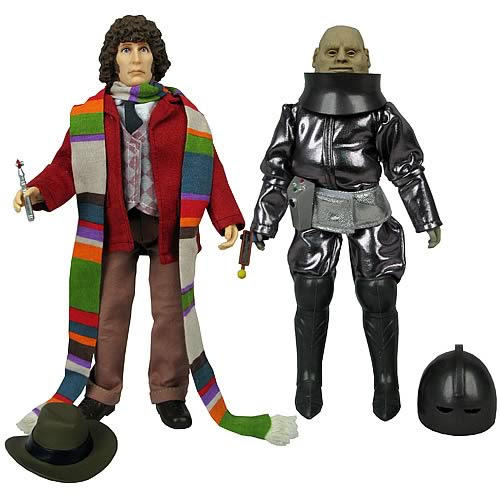 Now available for order at Entertainment Earth.
Posted by Plaidstallions at 11:03 AM No comments:

Kitbash Who?: The Second Doctor 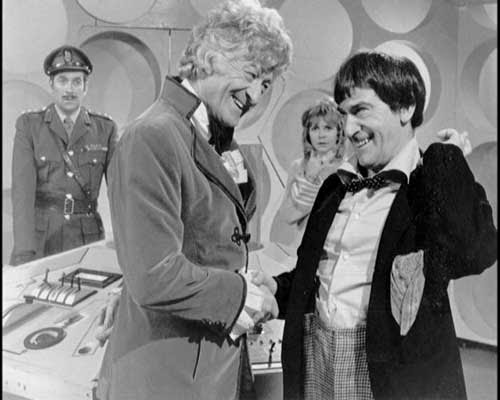 Steve (Azrak) has provided us with yet another groovy kit bash recipe to round out your cast of characters, this time it's the cosmic hobo himself, the second Doctor. You'll have to sculpt your own recorder however, more after the jump:
Read more »
Posted by Plaidstallions at 7:01 AM 2 comments:

Elisabeth Sladen -- the wonderful actress known to a generation as Sarah Jane Smith of Doctor Who and The Sarah Jane Adventures series -- has died today at the age of 63. This is a terrible and sad day, we love you Liz.
Posted by Plaidstallions at 1:41 PM No comments:

Kitbash Who? : The Brigadier Another quick and inexpensive recipe by our own Steve Moore to help beef up your cast of characters.With the passing of Nicholas Courtney, it seemed right to jump forward in the Who mythos and assemble the good Brigadier. This is another example of a minimum of skill and just the right pieces. RIP NC
The Brigadier as seen in the 7th season of Doctor Who.
The Recipe after the Jump:
Read more »
Posted by Plaidstallions at 8:38 AM No comments:

I have a pretty good feeling that children's underwear with the haunting visage of Tom Baker is not high on the list for 2011 but I could be wrong...

Posted by Plaidstallions at 8:05 AM No comments:

Kitbash Who? : The First Doctor 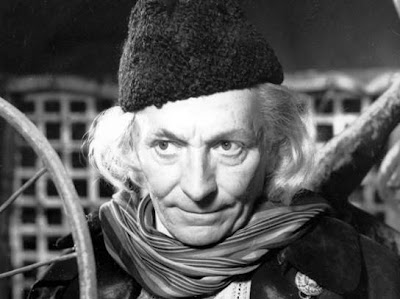 It's likely going to be a long while before BifBangPow gets to the Hartnell years, so here's a quick and inexpensive recipe by our own Steve Moore to get the first Doctor on the scene.
William Hartnell as seen in Unearthly Child debut
The Recipe after the Jump:
Read more »
Posted by Plaidstallions at 12:11 PM 2 comments: 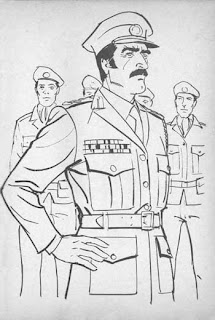 You will be sorely missed Mr. Courtney.
Posted by Plaidstallions at 5:40 AM No comments: The Palitoy Dalek was however, not made by Mego but by Japanese toy maker Tomy. Mego made one for Denys Fisher which is hard to find in any condition, it is a little more show accurate but will likely set you back $200 or more.
Posted by Plaidstallions at 8:49 AM 1 comment: I'm reading some confusion online about some of the character shoices for the series and with a series with a long and confusing history like Doctor Who it's understandable, so I thought it might be useful to provide some insight as to why those are suitable choices for the time.

One: The Doctor as portrayed by Tom Baker

I can't imagine anybody not recognizing him, yet knowing what Doctor Who is but wave 1 of the new Bif Bang Pow figures starts at his era and only his era. Unlike Character Options, who seem to move around the show's history between waves (which is fine), BBP is sticking to Tom for this wave and that's just dandy.

This is a first Season Tom, the head sculpt seems to emulating the haunting look of the credits and thank God he isn't smiling. Styre was the villain in the fourth Doctor's third adventure "The Sontaran Experiment". There is some interesting trivia here, Styre is the only Sontaran to be shown with four fingers (all the others had two) and he's the only one to brandish a pistol. So when you see him in the stores (hopefully soon) he is not a glitch, he is screen accurate.

The Sontarans menaced the fourth Doctor twice, which is two times more than any other Doctor. They're also clones, so Styre is an army builder of sorts. This is the figure that seems to cause the most confusion by the mego community as many see it as an odd choice but it's actually quite appropriate.

While most casual fans would expect Roger Delgado as the Master, he passed away before Baker even took the role and while the fourth doctor did clash with Anthony Ainley's Master, it was his final adventure and that Master absolutely belongs to Peter Davison's fifth Doctor.

The Master of the Baker era was this, a decaying half dead corpse who had used up all his regenerations. I've heard some complaints about the head sculpt but honestly, it's accurate to the make up job. The Doctor tangled with this Master twice and by that, this is the Master for the Baker era. "Revenge of the Cyberman" was the fifth adventure of the fourth Doctor's first season, it's not exactly a fan favourite (personally I like it) but it marks the only appearance of the Cybermen in the 1970s.

The best thing about BBP releasing the Cyberleader first is it almost guarentees us a regular Cyberman figure in the future it's just too obvious.

Cybermen are traditionally the second fan favourite villain behind the Daleks, so they are logical choice for wave one. Bif Bang Pow give us a sneak peak of wave one of Doctor Who: The Doctor, The Master, Cyber Leader and Field Major Styre. Life is good!

Before you say it: Yes, Bif Bang Pow knows Tom's head is a little big, it won't be on the final figure. It's all part of the Mego making process.
Posted by Plaidstallions at 3:19 PM No comments:

Toys for an Unearthly Child

We might as well start at the beginning, Mego never brought these figures to America where the character was then barely known, but lucky UK children were treated to one of the coolest toy lines of the 1970s.
More on the Denys Fisher line here at the Mego Museum.
Posted by Plaidstallions at 9:29 AM No comments: 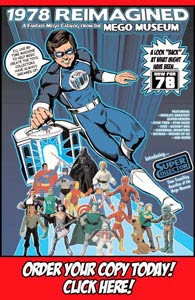